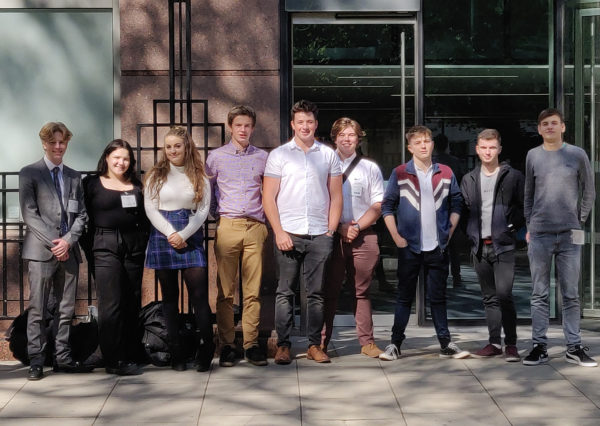 In July, finalists from the Shine School Media Awards enjoyed their moment of glory at Stationers’ Hall, with each team or individual claiming its gong from any of a number of categories. On September 20th, the winners of Kingsbridge Community College, Ermysted’s Grammar School and Draper Academy claimed the second part of their prizes with a masterclass day at TES.

TES, known to many as the former Times Education Supplement, has made room for this unparalleled insight into its creative process for several years. Head of Content Ed Dorrell and the busy but engaged staff at TES vary the day’s sessions to furnish each batch of Shine alumni with an holistic but detailed introduction to the many editorial roles in the life of a modern national publication.

After Ed Dorrell’s overview, the student cohort learned how journalists prepare and execute an interview. Each group interviewed another of their number, who ad libbed responses from Lance Armstrong, Steven Berkhoff and William Shakespeare. These richly entertaining but well thought through pieces were then written up for assessment, revealing something of the craft when applied at a professional level.

Zofia Niemtus, features editor, drew out the students’ talents for long-form writing with an exercise in magazine craft. Studying the most recent issue of TES for best practice, the groups discerned their own taste for pitches and hooks before proposing articles under their own steam. Examples from their own lives included teachers’ readiness for a paperless world, the socioeconomic issues behind racism and elitism in schools, and whether or not the prioritisation of dress code enforcement should be more important than mental health within the school environment. Going on the strength of these ideas, Niemtus invited the students to send proposals to her on any of the given subjects.

A brief break for lunch, which was sponsored by the Company, gave way quickly to Stephen Exley’s session on the changing face of news editorial. “There is the news that people want you to write, and the news people don’t,” he explained sagely, while introducing the various sources of news input, from press releases to doorstepping. Surah Cunnane, head of editorial content curation, closed out the day with a hunt-and-kill mistake-finding mission, which all three school groups completed with near-total accuracy. She explained why the production department is the ‘real hero of journalism’, explaining production editing and the importance not only of accuracy and sub-editing work like headlines and layouts, but also public interest and the role of law.

For Dorrell and his hard-working team, this annual visit is no wrench, with each TES staffer evidently delighted to share their input.

“The Shine School Media Awards constantly unearths promising young journalistic talent,” he explains. “It’s a joy to work with the young people who win at this event and a highlight of the year in the TES newsroom when they come in for this masterclass.

“I hope they take away a flavour of what it is to work in modern journalism, enthusiasm for the craft – and I hope they had a lot of fun.”